Have you ever heard of the Copper Skillet? No? Actually I hadn’t either until I received an invitation to attend the European championships.

Copper Skillet is a cooking competition for chefs specialized in cooking for conferences and is held by The International Association of Conference Centres (IACC), a global society of small and medium sized conference venues. This year it was the 12th annual competition.

The competition is done just like a sporting event starting with a national competition and then a European round. The winners of the national rounds then compete in the European tournament from where the winner will then continue to the world championships.

Yesterday saw the European championships, and I was fortunate enough to get the opportunity to observe the competition. And it was SO amazing!

DH and I spend a Wednesday afternoon at the Comwell Køge Strand Hotel not knowing what to expect, knowing little about the Copper Skillet, but were both high on adrenaline when we left.

The competition was split into two rounds, one for four experienced chefs and another having four apprentices competing against each other. The competitors this year were from the United Kingdom, France, Sweden, and Denmark. The Danish cook-off had been held on February 1 and the winner of the competition for experienced chefs was Kasper Roager from Comwell Sorø Storkro while Trine Thybo Rasmussen of Hotel Koldingfjord had won the apprentices’ competition.

As the competition starts, the chefs have 15 minutes to choose ingredients and plan their menu, and they don’t even know beforehand which ingredients they will be able to choose from. Yesterday they had a choice of four proteins; salmon, chicken, bacon and tiger prawns. When the menu is planned it has to be written down in “menu terminology” and turned in to the judges.

Next, the chefs have 30 minutes to prepare their dish in two identical samples; one for the judges to taste and the other for presentation. While the chefs are hard at work, the spectators mingle around the cooking stations, observing the chefs at work while loud music keeps the pace up… so as you’d imagine, you’ve got to have nerves of steel to compete in the Copper Skillet.

When time is up, the judges will taste, discuss, and eventually name a winner. And yesterday Denmark was once again able to add a star to the international cooking lineup! Trine Thybo Rasmussen won the first prize in the apprentices’ competition while Kasper Roager got a well-deserved second place among the experienced chefs.

Both chefs demonstrated great work…and without any kind of national bias I would have put Kasper at the head of the competition! His dish was beautiful, different, and healthy, whereas the French winner’s dish was unimaginative featuring a lump of pan seared chicken with (what we usually refer to “frozen greens”) – bell peppers, onions, and green beans done Julienne style. Not impressing!

Anyways, it was a great experience observing an international cooking competition, and I hope I’ll have the chance to attend future cook-offs. 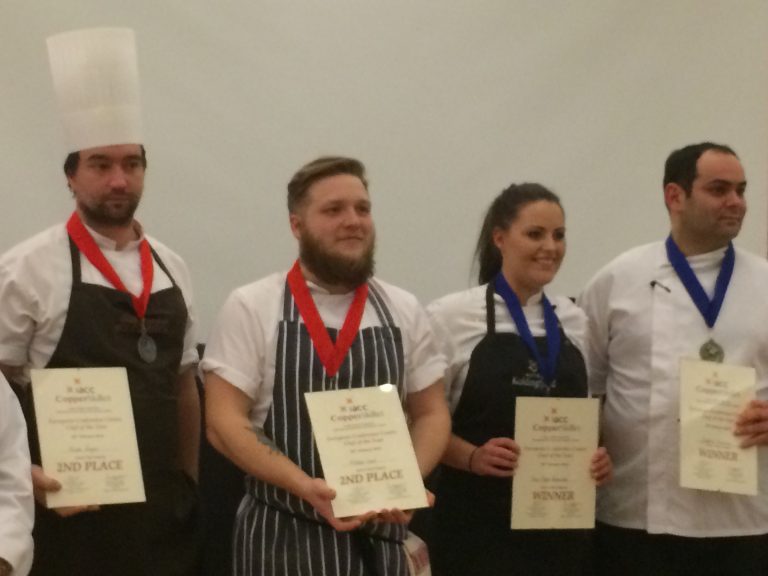